We’ve all heard of Six Flags Over Texas and Six Flags Over Georgia. But how many flags have fluttered over Albany, New York? Albany has not only been under the sovereignty of three different countries (The Netherlands, Great Britain, and the United States), but also under the authority of two companies and a patroon. And all of them waved a flag or two over our fair city.

When Henry Hudson sailed the Halve Maen to the present site of Albany on September 22, 1609, he was in the employ of the Dutch East India Company, then under the protection of the government of the United Netherlands. He would have flown both flags from his masts.

This is the flag of the United Netherlands, the seven lowland provinces which separated themselves from the Spanish Netherlands in 1592.  They adopted the colors of William I of Orange, the leader of the Dutch Revolt, which were yellow, white and blue.  It was the official flag of the Dutch Republic when Hudson first sighted the Albany shore, when Fort Nassau was established in 1614, and when Fort Orange was built in 1624.

The flag of the Dutch East India Company was simply the flag of the United Netherlands with a monogram of the company’s name in the middle white bar.  The letters ‘VOC’ stood for Vereenigde Oosterische Compagnie –  The United East India Company.  That company had engaged Henry Hudson to find an alternative route to Asia through the Arctic Sea.  Hudson thought the prospects were better for a westerly route and so he headed toward the Americas.  Either way, Hudson was way off course by the time he got to Albany.

In 1621, the Dutch Republic granted a trade monopoly to a new company of merchants – the Chartered Dutch West India Company.  The new company was given jurisdiction over the Atlantic slave trade, Brazil, the Caribbean, and North America.  It was this company that, in 1624, sent eighteen Walloon settlers 150 miles up the North River to establish a fur trading post, which they would name Fort Orange.  It was also the Chartered Dutch West India Company that granted a patroonship to one of its major investors, Kiliaen van Rensselaer, in 1630.

Then, in 1650, Prince William II of Orange died.  He had done much to alienate himself from the Dutch States-General (or parliament), and the States-General responded to his death by passing a law that no one from the House of Orange could ever be stadtholder again (that lasted only about 20 years).  This new anti-Orange sentiment was memorialized in a new flag design which replaced the orange horizontal bar with a red one.  This was supposedly a color common to several of the seven provinces which constituted the United Netherlands.

The flag to the left reflects both of these historical developments.  It shows the red-white-blue flag of the post-1650 Dutch Republic, with the monogram of the Chartered West India Company – GWC – for Geoctroyeerde Westindische Compagnie.  The company flag, before 1650 would have been similar to the East India Company flag, except with its own monogram in the center.  This flag would fly over Fort Orange until it was ceded to the English in 1664. 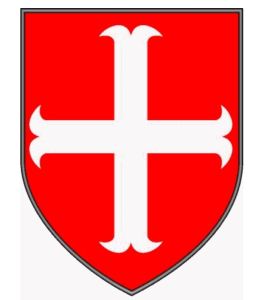 The Van Rensselaer’s early arrogated to themselves all manner of feudal privileges and honors, including, apparently, a flag.  In 1653, the Patroon sent a petition to the West India Company, complaining of men “coming into the Colonie of Rensselaer’s Wyck, and there causing the petitioner’s flag to be hauled down, in opposition to the will and protest of the officers.”  History has not left us with an image or description of that flag, but we do know that the patroons used the Van Rensselaer family crest – a 1632 map of Rensselaerswijck features it.  It consisted of a red shield with a so-called moline cross in white.  It is not too far-fetched to suppose that this striking crest might have formed the basis for the Patroon’s own banner.

With the English conquest of New Netherland in 1664, there came another new flag.  From shortly after James VI of Scotland had ascended to the English throne in 1603, this personal union of the Scottish and English crowns was commemorated by the flag known as the Union Jack (the ‘Jack’ being a reference to King James).  It was made by superimposing the cross of St. George (red on a white background, the ancient symbol of England) over the white ‘saltire cross’ of St. Andrew (a white X on a blue background, the equally ancient of Scotland).  This would have been the flag hoisted over newly named Fort Albany when English troops arrived to take possession of the small Dutch trading post.  This flag would continue to be the standard of English rule until 1707, with only a brief interlude in 1673-74, when the English colony fell briefly again under Dutch rule. 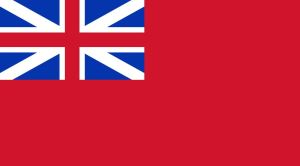 It was during the reign of Queen Anne, and apparently at her request, that in 1707, a new flag was designed for British naval vessels and merchant ships.  It was made, in part, to commemorate the Act of Union of the same year, which definitively united England and Scotland into one realm of Great Britain.  This flag was referred to as the Meteor Flag, presumably due to its abundance of flame-like red. It also soon came to be used even on land in the English overseas colonies, including the Province of New York.  This flag would have flown over  Fort Frederick shortly after it was rebuilt as a masonry fortification in 1703. 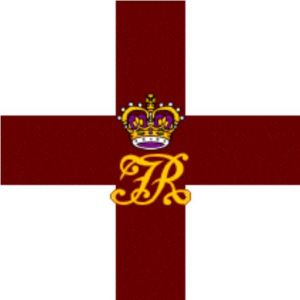 A flag that might have flown over Albany is this one to the left, which was presented by King James II of Great Britain to Edmund Andros, after Andros had been named royal governor over the combined provinces of New England and New York.  This square flag is a simple St. George’s cross with a crown and the king’s monogram in the center (JR for Jacobus Rex).  It was a clear visual statement that the man who flew this flag spoke for the King. 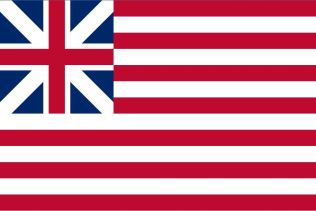 In the early days of the American Patriot movement, it was not immediately clear that actual independence from England was a primary objective, and the flag used in those early days (1775 – 1777) reflected that ambivalence.  This so-called ‘Grand Union’ flag kept the Union Jack in the position of honor, but in a field of thirteen white and red alternating stripes to represent the thirteen colonies.  They were, after all, simply fighting for their rights as Englishmen.  But it was also noting the unity of the American provinces, a unity earlier expressed in the Albany Plan of Union.  The Grand Union flag would certainly have accompanied militia units on their way from Albany to the battlefields of Saratoga.

But after July 4, 1776, independence was certainly the objective of the Patriots.  And they needed a flag to represent that fact.  With apologies to Betsy Ross, the earliest known ‘American’ flag was designed by Francis Hopkinson of New Jersey, one of the signers of the Declaration of Independence.  Originally designed for the Navy, it became the preferred design as a national flag, the ‘Stars & Stripes’ being adopted as the official banner of the United States by the Continental Congress on June 14, 1777.  The arrangement of the stars was not specified by statute, and so many variations were created throughout the war and after independence (the ‘Betsy Ross’ circle of stars has no attribution prior to 1792).  It would interesting to discover when the first such flag flew over Albany.  New York City had to wait until the British evacuation on November 25, 1783, but Albany had been securely in Patriot hands long before that.

I hope you’ve enjoyed this colorful excursion through Albany’s history by way of its flags.  I’ve described ten flags here, not including various state, city, and military flags.  But in any case, I think we have Texas and Georgia beat!